Not very long ago, Velo Chocolate received a Downtube Mini, for test purposes, and assuming we decided it fit the bill, to use as a bike for the press to test out. Well, having tested it fairly thoroughly (my 11 year old son decided he should test it by going over the handlebars at least once), we've decided it's a bike we really want to offer.

The Mini has a very similar frame to the bigger Downtube bikes, and is similarly stiff and robust, but is smaller, with 16" wheels rather than 20. This means it folds really compact, almost as small as a Brompton, and fits in even very small cars, is practical for the tube, in fact anywhere that the folded size is really important. We see it as a direct competitor for the Brompton, and it has some distinct advantages. For one, it seems likely to be better at accommodating bigger riders, for another, it has an 8 speed Sturmey Archer hub gear, which gives a wider gear range than the Brompton, thirdly, with a seatpost rack fitted, it carries luggage much better than any Brompton I've seen, and finally, it's going to be cheaper than even the 3 speed version. The Brommie definitely folds a bit smaller and neater, but for us, the price differential is too much to overlook. The final price here has yet to be decided, since we need to find a price point that makes Downtube enough money to justify the extra hassle of shipping them to customers over here (they'll ship direct from the States), but which represents the usual great value for money that you expect from a Downtube.

Our bike has been going through it's paces, carrying me on several London commutes, and carrying a friend on a very special ride (more of that later). At 6'3, it doesn't quite have the seatpost height for me, but I only need an inch or so, and I'm looking at a device called, unprepossessingly, the Butt Buddy which would move my seat up by another 2 inches. With the Axiom quick release seatpost rack on, it carries my Ortlieb Office Bag 2 beautifully, and has plenty of ground clearance for panniers too. I've added a Brooks B66 in an attempt to get the extra saddle height I needed, but it turned out not to be any higher. The bike has acquitted itself well on the Embankment Grand Prix (my lack of full leg extension not withstanding), and it folded up tiny to be out of the way on a crowded train, and also in a clients office. I'm loving it, and I can't see me wanting to do without it! I'll have to, however, since once we agree the price with Downtube, I'll be working hard to get it out to the press, ideally the mainstream press rather than cycle mags. One publicity stunt we pulled has already attracted a lot of people to this site, but I'll say no more of that for now. The pictures below are not really presentation quality, I simply snapped them with my camera and Blackberry at different times - expect better on the site. Looking at the second image, I can see that I have been blasting around London with the cardboard badge still attached to the rack. What a class act! 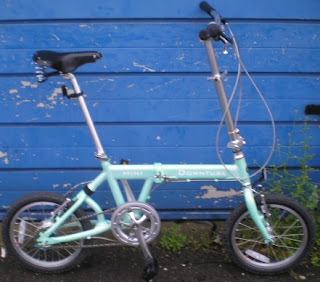 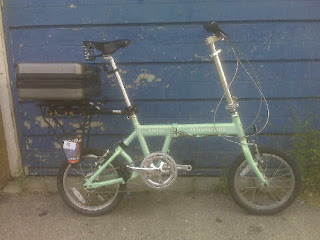 I really like the look of this Mini, however I'm in need of a bike with a very low gear ratio.

Could you tell me what the gear range is please?