Sometimes an opportunity comes up that's just too cool to turn down, and World Naked Bike Ride was one of those! It's not so much a protest, more an awareness raising event, pointing out the problems of the dominance of oil in our economy, and by way of nakedness, illustrating the fragility of a cyclist in traffic. It also happened to look like a lot of fun! So, I recruited a female friend, packed up the Downtubes, and headed for the Southampton ride. We hung some Velo Chocolate adverts on the racks, and headed for the Common, with a little trepidation. Poor Jo, now known as Lady Downtubediva in the cycling community, was more than a little nervous, but after we'd shed our clothes, it didn't seem such a big deal, and the combination of that and the signs attracted quite a bit of interest!

The ride itself was huge fun (Jo said she'd never had so much fun in her life), going right through the centre of Southampton, and attracting 156 riders. We were cheered and applauded all the way round, and saw nothing but smiles and support. Judging by the rise in the number of hits on Velo Chocolate since the weekend, there's nothing quite like getting a naked girl to ride your bike through town to attract a bit of commercial interest! Below are photos which are hopefully "safe for work" enough. I think the second one captures the joy of the event rather well! 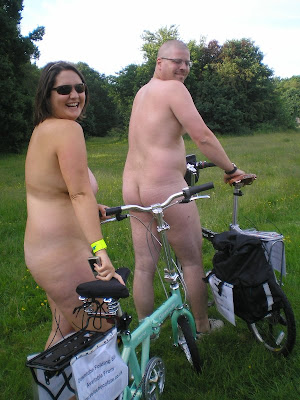 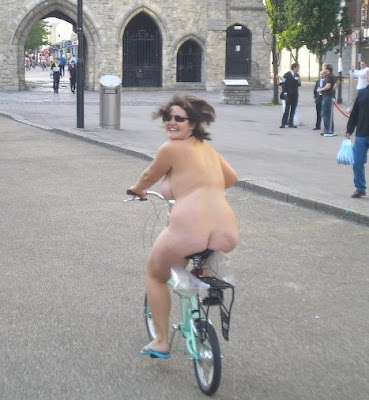